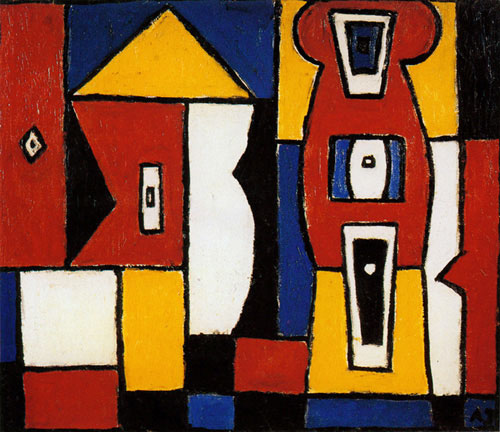 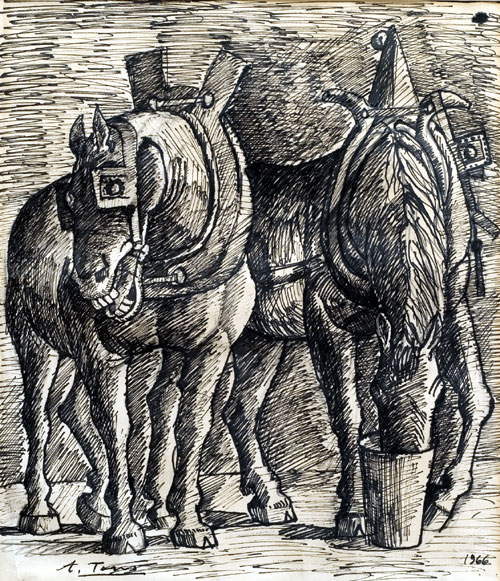 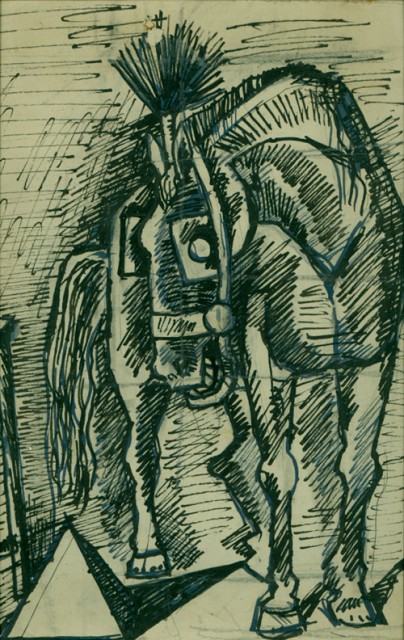 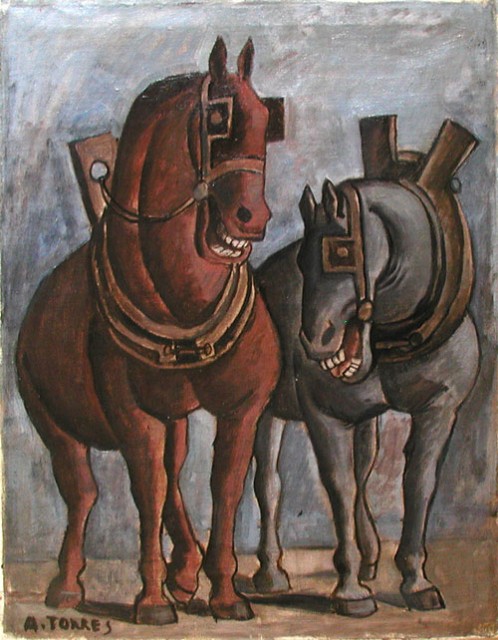 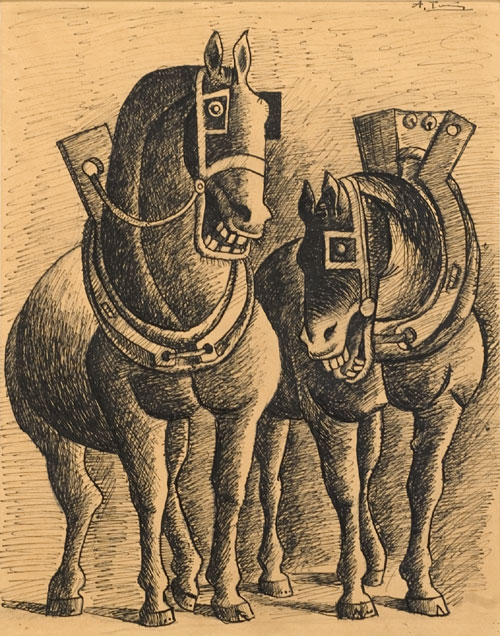 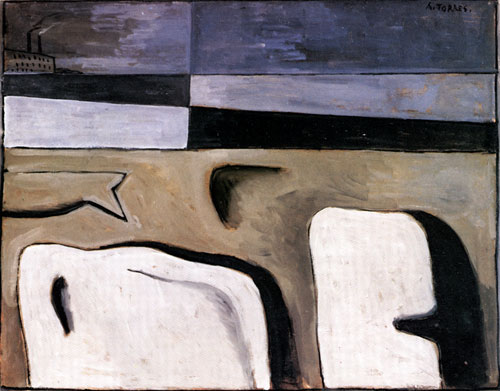 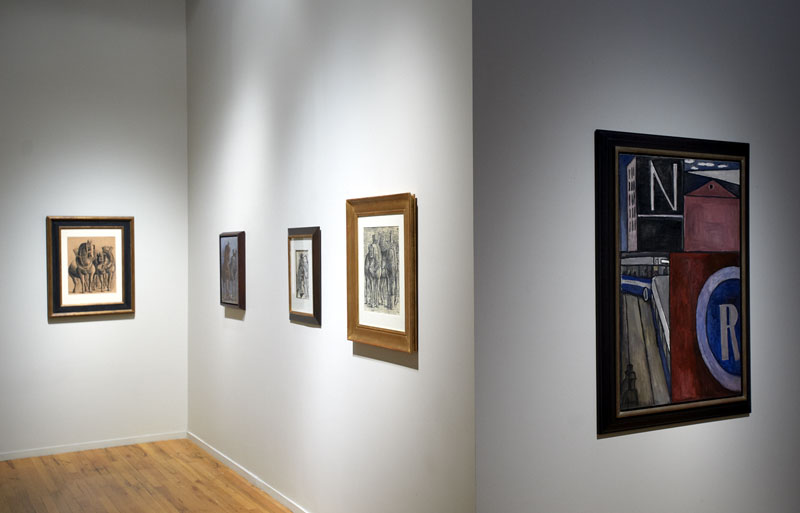 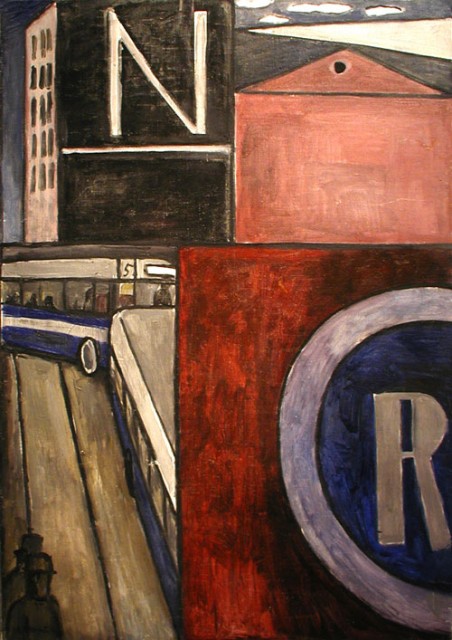 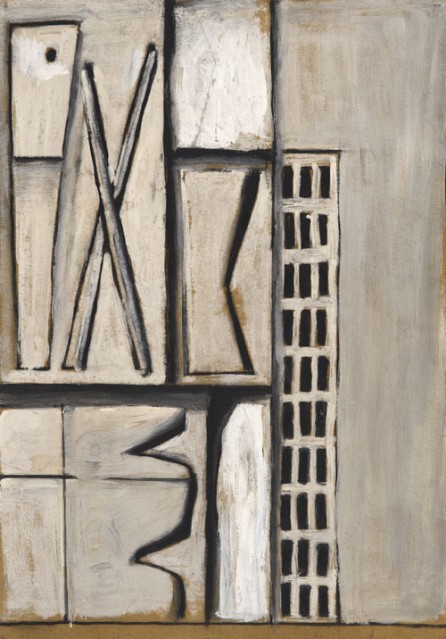 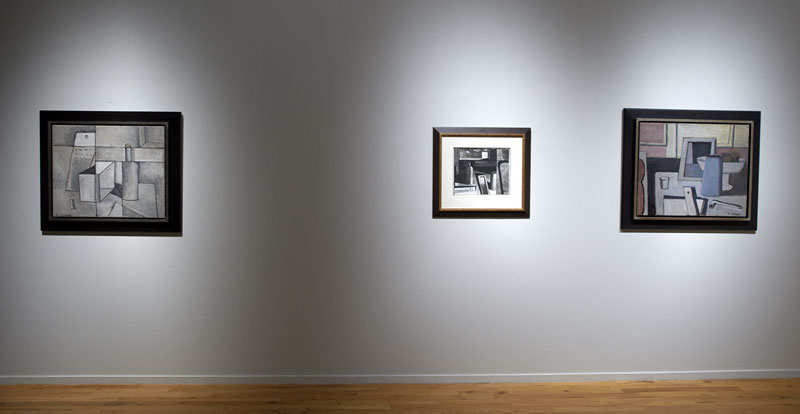 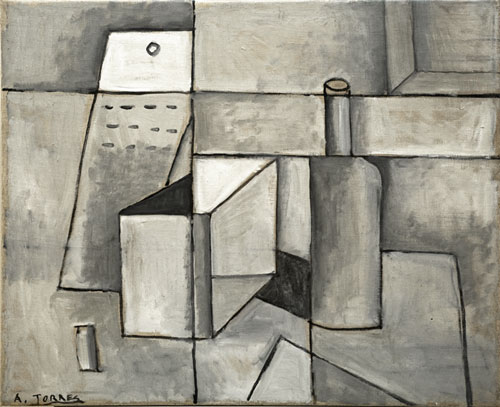 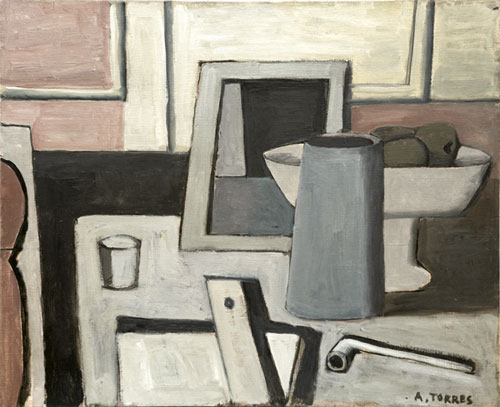 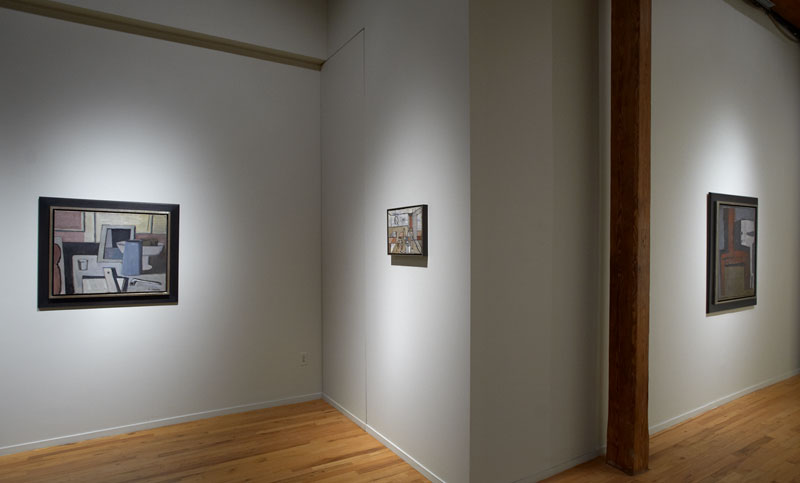 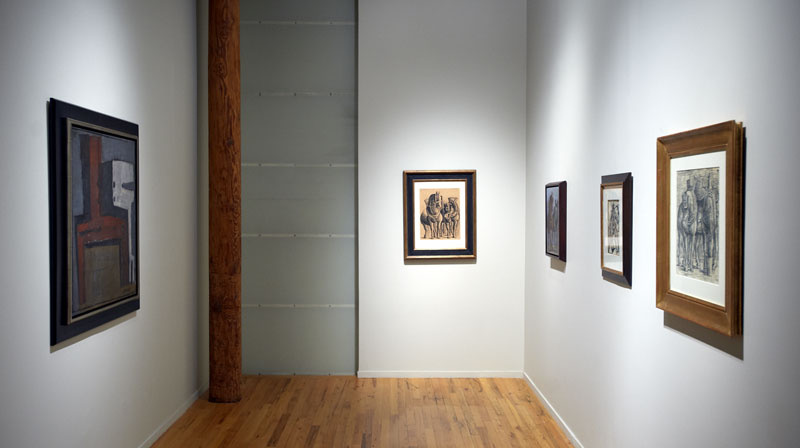 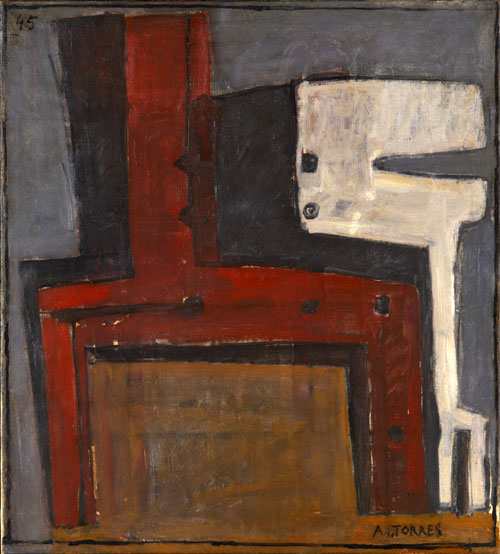 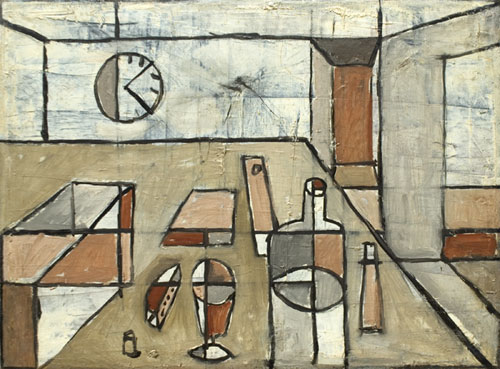 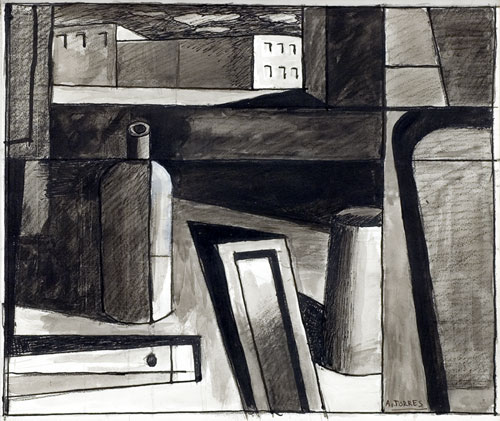 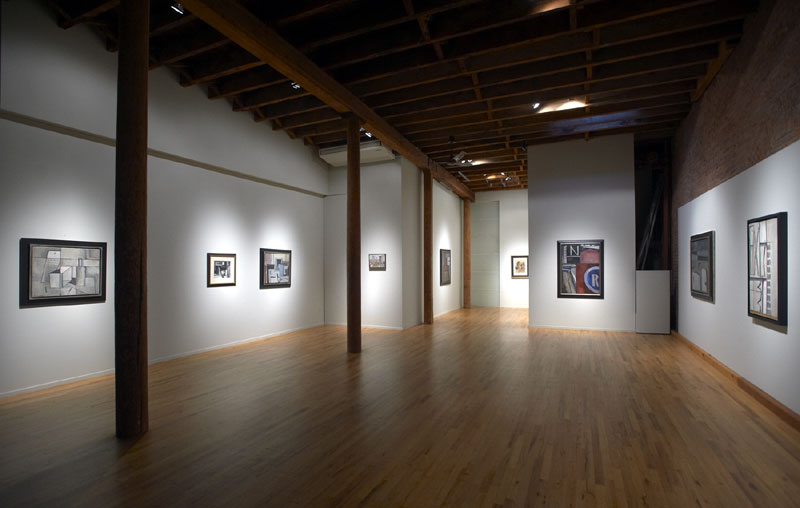 This exhibition of paintings and drawings by Augusto Torres spans 40 years of work, 1940-1980

Augusto Torres fully realized his aim to create an art of order, clarity and harmony-but also mystery-which would “be faithful to real objects and at the same time feel free of them.”  For many years, Torres has assiduously pursued his vision of the true nature of painting.  Probing his feelings before objects and following the laws of number and proportion, he discloses in his work an ordered structure of physical reality while also evoking its metaphysical quality.

Torres’ tightly woven canvases are quiet, restrained and spare works whose subject matter and execution never call attention to themselves, but reveal themselves slowly and imperceptibly, rewarding contemplation.  They embody lifelong preoccupations with themes of the studio, city, sea and countryside-still life elements, streets, boats and horses that are at once personal and generic.  Each painting is a harmonic, architectonic whole, whose nuanced chromatic, tonal and rhythmic relationships create a poetic geometry.  In their gravity, clarity and simplicity they belong to the classical tradition of the early Italian Renaissance.  Yet their distinctive palette (both somber and bright) and disquieting luminosity bespeak a Spanish and surrealist-tinged Latin American heritage.

Construction in Five Colors was shown in the 35th exhibition of the Taller Torres-García 1946 at the Atheneum in Montevideo. A majority of the paintings, including those by Torres-García, were in primary colors.The year before, the group had painted 29 large murals in the same style on the walls of a new hospital for tuberculosis patients. The critics were appalled by the "strident color that disturbed the sick that were in need of repose. "The murals elicited so much controversy that a humorous article in the press suggested that "they turned out to be more dangerous than the Tuberculosis bacilli itself."

As Barbara Braun explained, "Southern Hemisphere, is a provocative reference to Montevideo's flat expanse of watery horizon and the unique hilly outpost known as El Cerro (in the top left hand corner) the site of a huge factory, which along with big ships riding high on the water waiting to enter its harbor - are emblematic of the city.  Below, beached, amorphous, aquatic forms simulate the organic detritus that regularly washes up on Montevideo's shores. The peculiar ambiance of this remote, far southern point on the American continent - its vast desolate stretches of sea, sand and sky, the eerie quality of its light - increasingly pervaded Torres' landscapes from this time on."

As Mari Carmen Ramírez  wrote in "Re-positioning the South: The Legacy of El Taller Torres-García in a Contemporary Latin American Art. "Augusto Torres first arrived at his mature style in the 1960s while on an extended visit to New York. In the work produced during this decade and afterward, the overall emphasis remains on the structural organization of the painting and the positioning of objects within the orthogonal structure. Objects remained the principal focus of his work. "The key to Augusto Torres" style of this period was the way in which he worked with the pictorial elements as independent entities-color and tone are employed as elements in themselves, without reference to the overall atmosphere of the work, shadows are made into objects, objects possess their own expressive lines and rhythms.

Augusto Torres loved horses; as a boy in Paris, he followed tradesmen's carts pulled by working horses, observing every detail, back at home he drew them with faithful details. For him, the best representations of horses were by Paolo Uccello and the early Renaissance masters. Torres draws and paints their powerful forms and ample curves, fully conveying their strength and vigor.

Still lives were a recurring subject in Torres' work; in them he combined a synthesis of geometry and real things, portending another reality beyond the visible. The ideal space and rarified atmosphere he created in the tempera on paper titled Interior results from a compressed perspective. The diagonal lines of the objects in perspective produce a visual tension by not converging at the logical central point, and the shapes of the shadows cast by the objects in the composition are just as important as their shape. On this small paper Torres depicted three worlds in three separate spaces. On the right delimited by a straight line that cuts vertically down the paper plane is the space of ideas,represented by abstract forms; to the left is the real world, of light and shadows; and the exterior world of sky and buildings, is seen through the open window in the background.

Torres explained about the subject of his paintings, "Now I can forget about the utilitarian purpose of real things when trying to capture them in their pure being. Thus freed from their day-to-day use, which conceals rather than reveals them, these objects combine better with each other and with the aim of art, which organizes them in a motionless rhythm."

His paintings are a new addition to the pictorial tradition. For Augusto Torres, as was the case with many modern artists, art wasn't to be a contentious, provocative or unsettling attitude, but a slow and sure conquest of the medium, its innovations, as are all really important ones, are quiet and take time to comprehend. In a conversation, Augusto Torres explained, "Poetry and metaphysics is what painting brings to art for they can only exist when the artist assumes the real world within his spiritual world, and as he expresses and structures the real world pictorially, he also expresses the real soul of things."