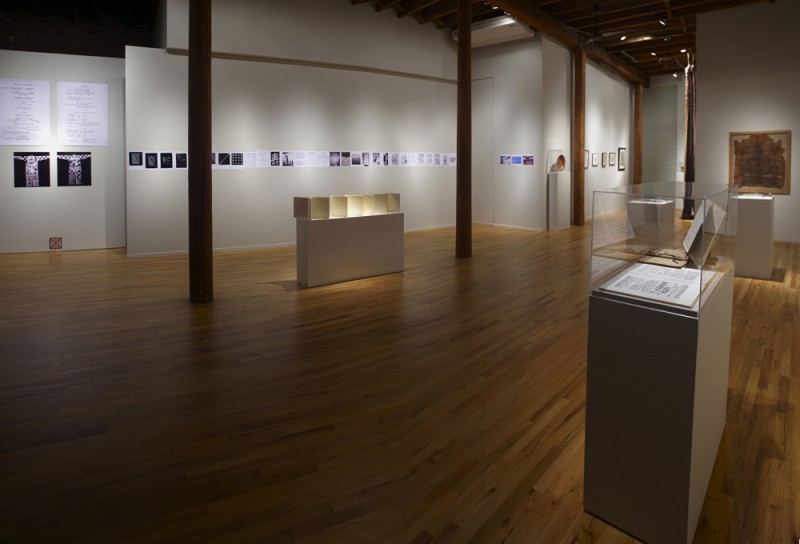 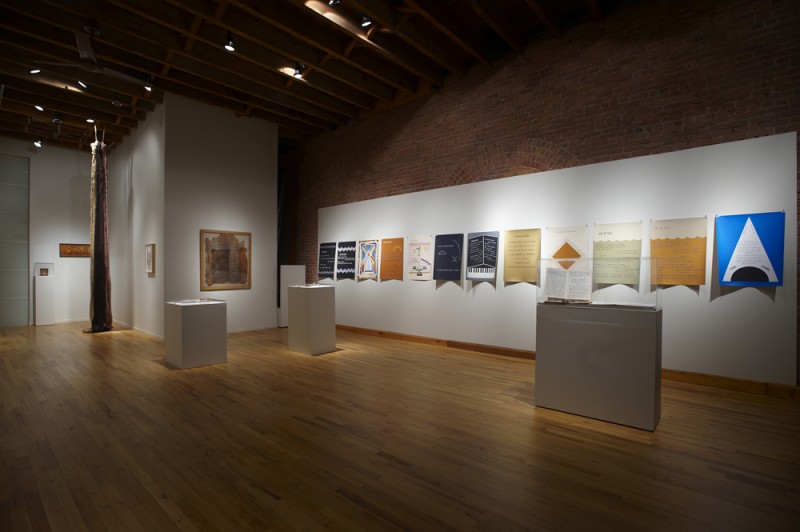 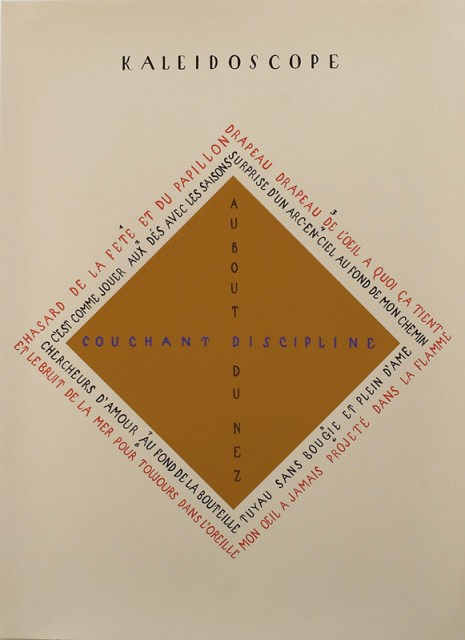 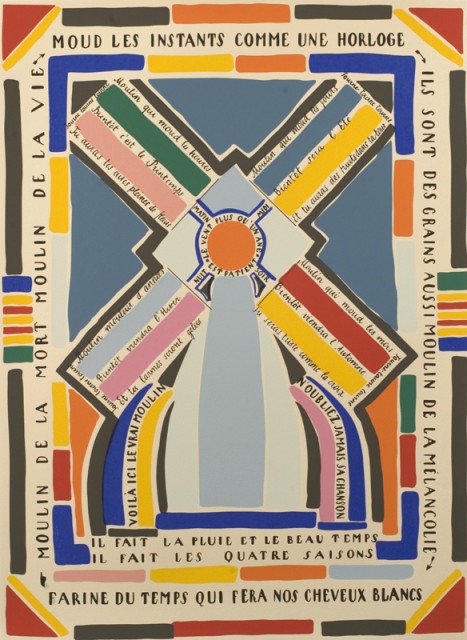 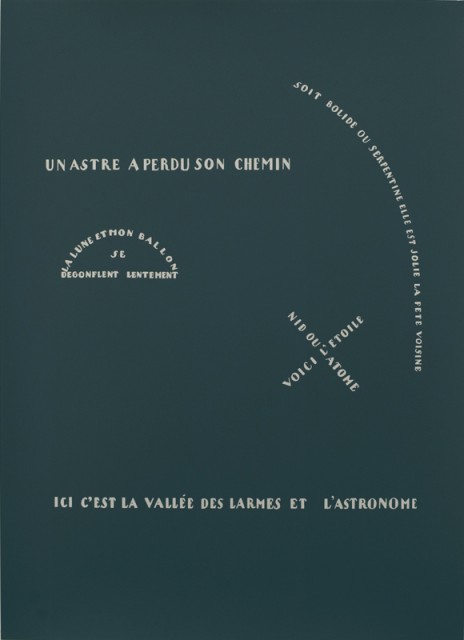 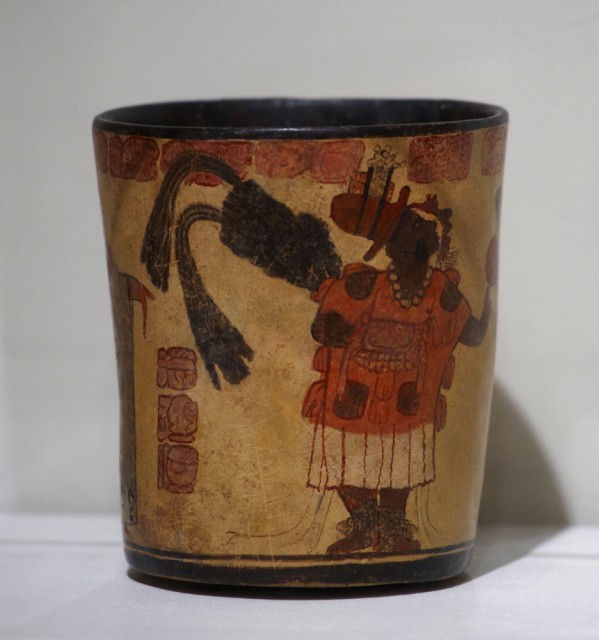 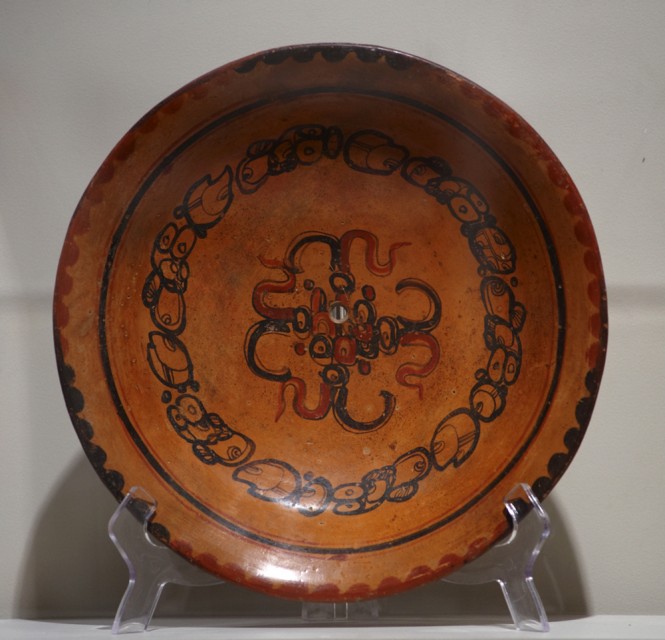 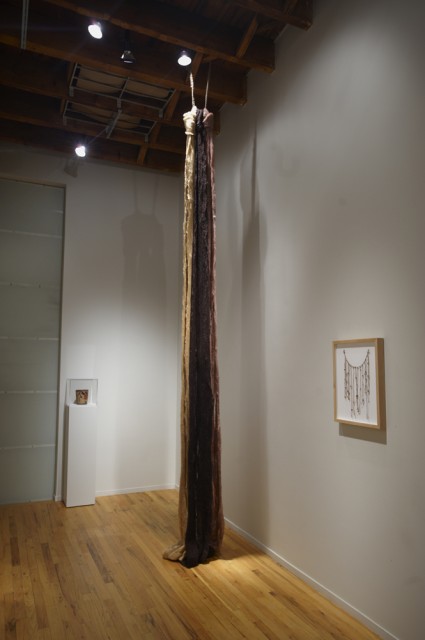 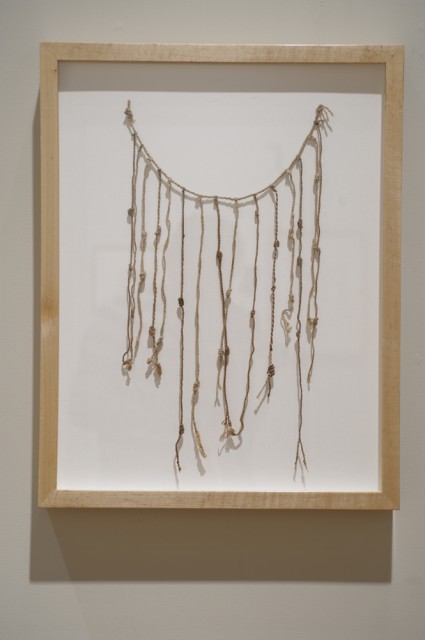 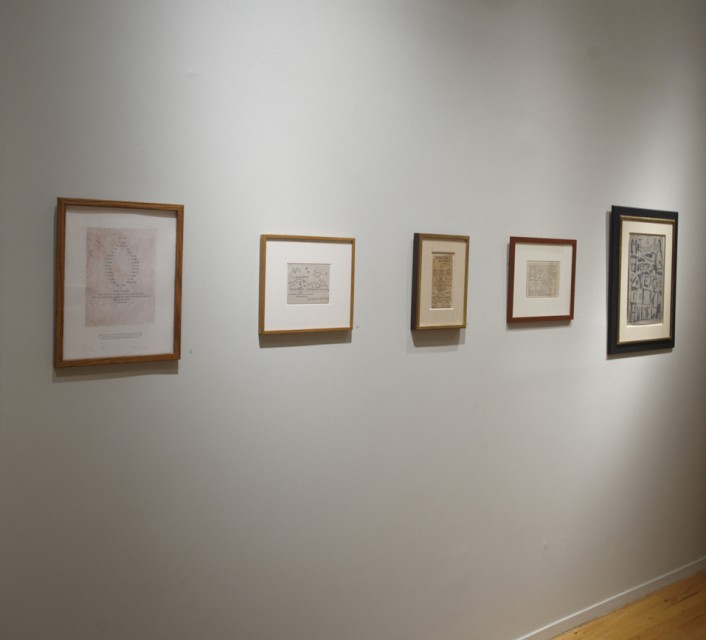 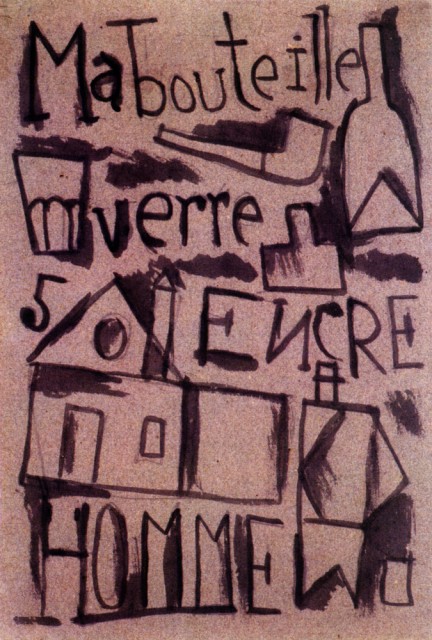 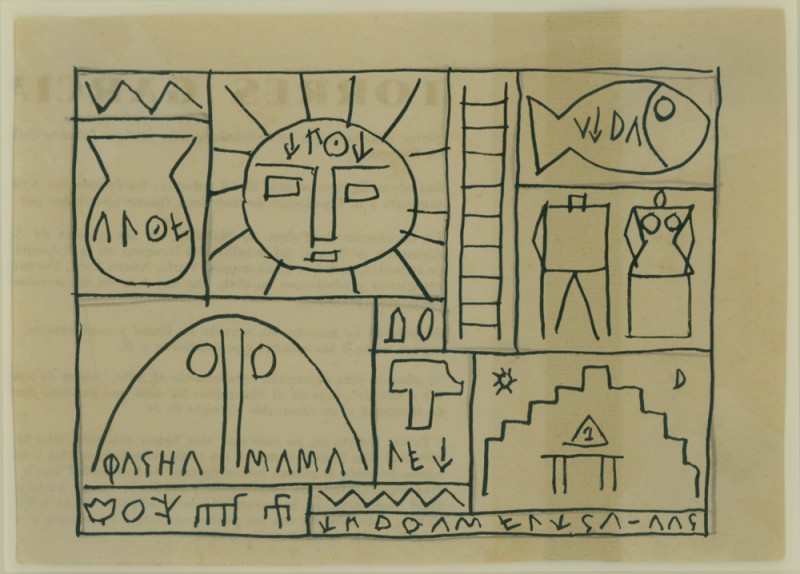 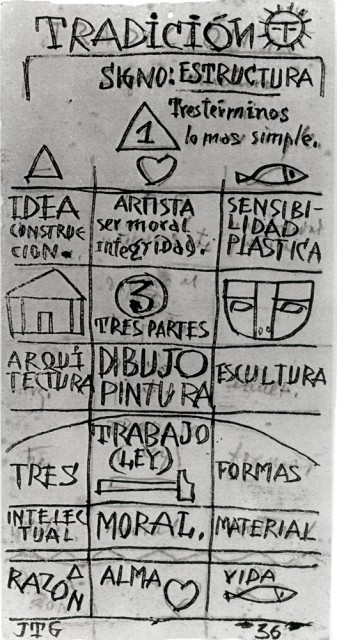 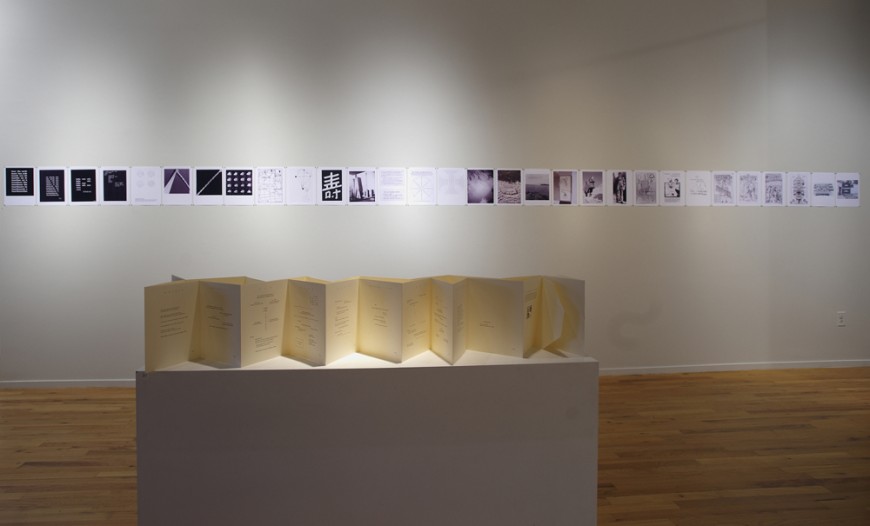 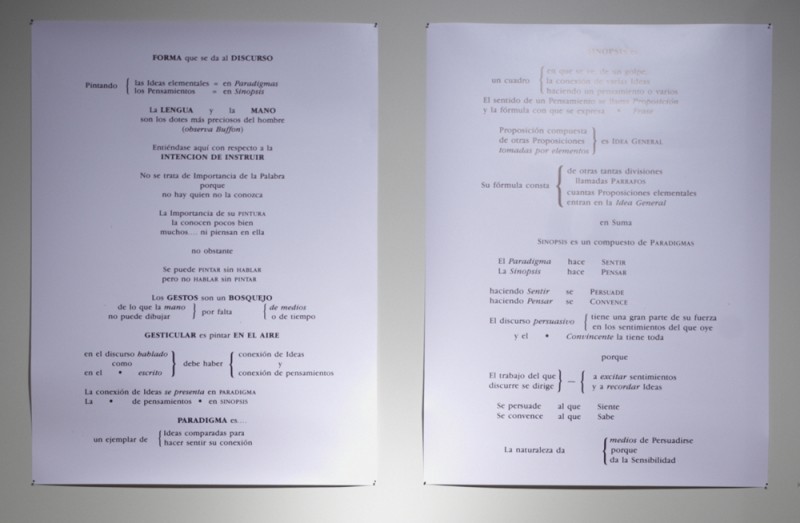 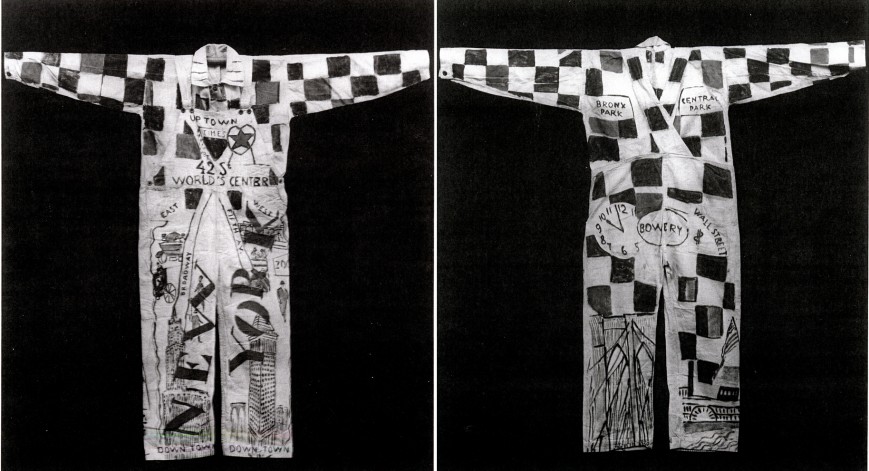 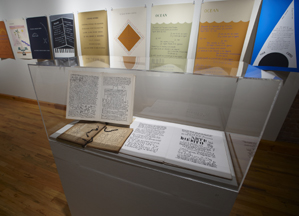 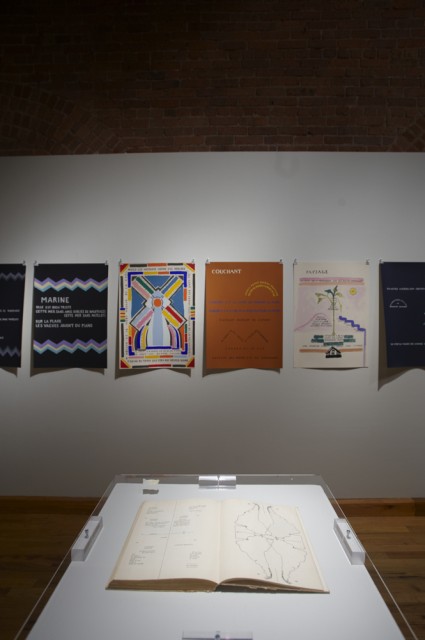 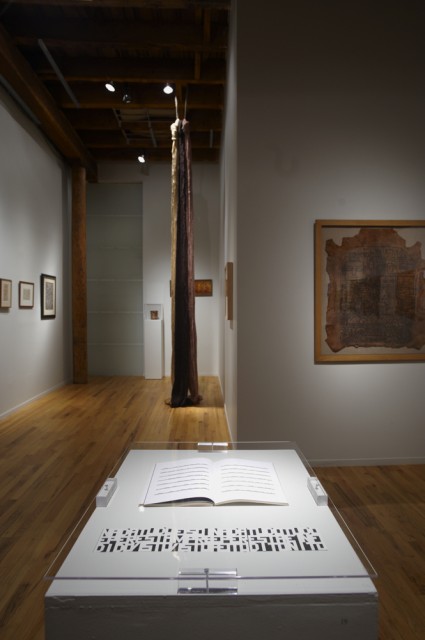 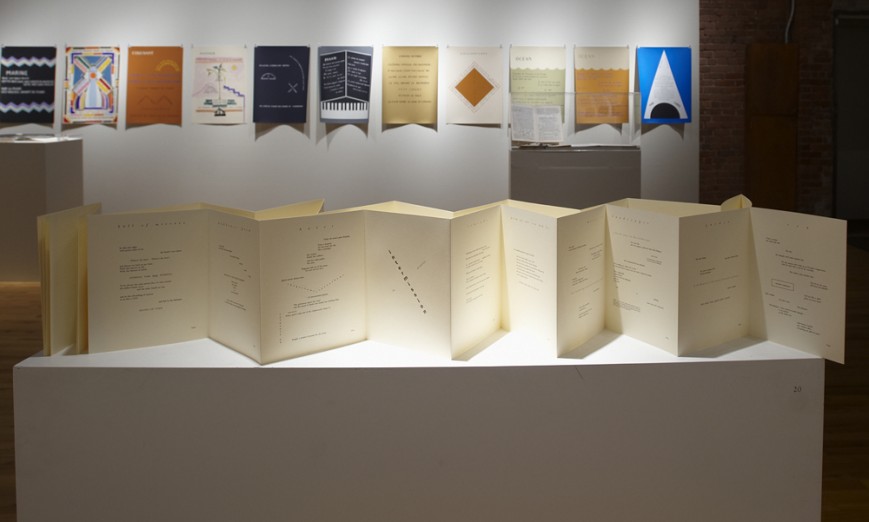 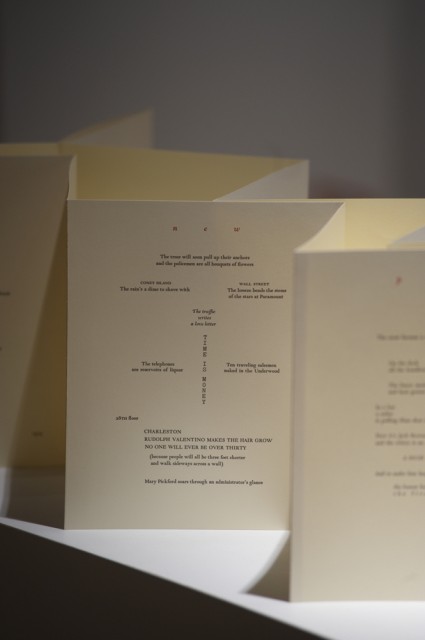 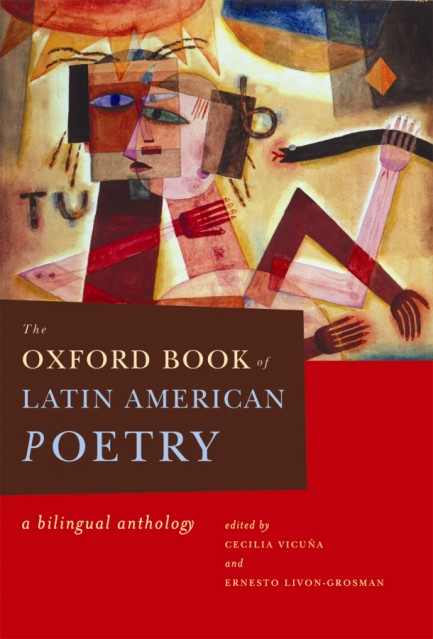 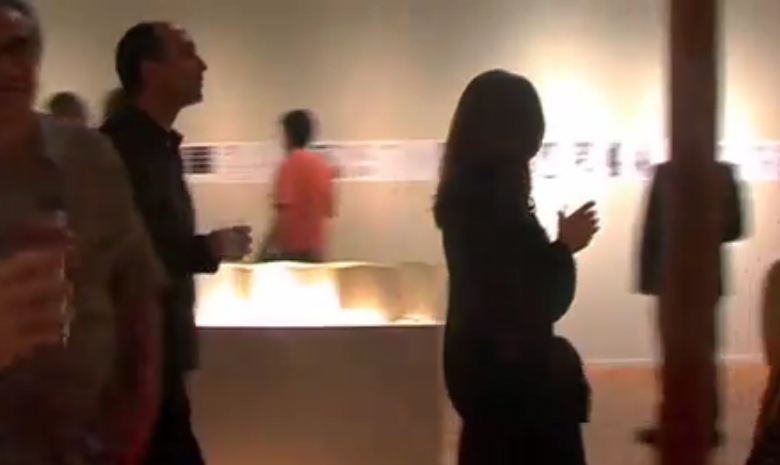 PAINTED IDEAS, curated by Cecilia Vicuña, is an exhibition celebrating the visual poetry in the newly published Oxford Book of Latin American Poetry.  This compilation, edited by Cecilia Vicuña and Ernesto Livon-Grosman, is a milestone anthology that covers more than 500 years’ production of Latin American poetry by more than 120 poets.  The book includes texts by indigenous, Colonial, modernist and feminist poets, as well as 1960s’ liberation poetry, and experimental and oral expression.

One gallery wall is hung with 12 facsimiles of the Salle XIV Painted Poems bythe Chilean poet Vicente Huidobro (1893-1948) that were designed in collaboration with Robert Delaunay (1885-1941). The title is a phonetic word pun on the word salle (room) and sale (dirty, nasty), and XIV (fourteen) refers to 1914, the first year of the First World War.  The poems were originally shown in 1922 at the Edouard VII theatre in Paris, but the exhibition was deemed to be too daring and was shut down after three days.

According to René de Costa who directed the 2001 facsimile edition project of the Painted Poems for the Museo Reina Sofía in Madrid: “What makes these poems remarkable is that they are neither calligrams nor pictograms, they are a perfect blend of text and visual image. Without being poetry on painting or painting on poetry, their visual impact corresponds to what the text says, and what the text says is reinforced by their visual appearance.“ The art critic Waldemar George called them “Lyrical pleonasms,” compositions in which the text and the image are combined in such a way as to astonish us twice over.

The Andean people never acquired the art of writing, but they developed a system of communicating through elaborate knotted cords made of alpaca or llama wool and dyed in various colors.  Called Quipus, these cords -knotted with information- were carried great distances and served as the means of disseminating news and keeping records.

A framed Inca Quipu fragment from Perú, circa 1500 AD, hangs next to the installation by Cecilia Vicuña titled “Quipu huérfano”or Orphan Quipu, an unspun wool hanging that offers a contemporary version and homage to the ancient form of record keeping.  In the Oxford Book of Latin American Poetry there is a poem found in a quipu, it was transcribed to Quechua, Latin and Spanish by Blas Valera and included in Garcilaso de la Vega’s 1609 book titled “Real Life Commentaries on the Inca,” the original quipu didn’t survive.

Two Mayan ceramics dating from 600-800 AD, feature hieroglyphic script.  The cylinder vessel depicts a procession of two men leading two elegantly dressed female scribes, documenting their importance within Mayan society.   The Glyph plate is made from fine grained buff clay without the benefit of a wheel.  It was slipped in a transparent golden colored glaze and painted with black and red pigments.  The central medallion of the plate refers to the four quarters of the cosmos.  Flames pour from the mouths of four deities, shown here as a series of red and black circles and a ring of glyphs surround the central medallion.

According to Vicuña, the writing tradition of Mesoamerica was fully alive when the Spanish arrived in 1519.  The Mexicas were astonished to see that the Spaniards also had books.  Only four Mayan books survive, the rest were destroyed by the conquerors as they imposed their own language, and within a short time Mexica and Mayan writing traditions were irreparably lost.  The first poem in the Oxford Book of Latin American Poetry is a poignant excerpt from a Sixteenth Century poem recorded by Bernardino de Sahagún, a Franciscan missionary, titled “And all was destroyed.”  Originally written in Nahuatl, it recounts the Spanish conquest of Tenochtitlan and the loss of everything they held dear and sacred.

The Uruguayan artist Joaquín Torres-García (1874-1949) is prominently featured in the exhibition; in these drawings his pairing of a word and its corresponding image, both symbolic representations, exemplify his search to include in his paintings everything pertaining to humanity in a non literal or descriptive form.  Torres-García reasoned: “Either you write the name of things or draw its schematic representation: a sign.”

The idea of a thing, the unconscious image we have of it, is the most accurate and symbolic.
Without any kind of explanation, a symbol has direct access to emotion; it answers the need to give perceptible form to the imperceptible.  Symbols are the nexus between reason and nature; life, emotion and geometry united.
Torres-García’s language of meaningful images and words isn’t autobiographical but universal.  Although he never explained his symbols, he drew charts as in “Tradición” 1936, a pen and ink drawing where he grouped symbols in compartments identified by a triangle, a heart and a fish which for him correspond to the mind and reason, to emotion and feeling, and to life and instinct respectively.

In a “photo gallery” Vicuña gathered images of diverse authors from different time periods.  One photograph is of her 1966 “precarious” installation in Con-cón, Chile.  There she carved a spiral shape in the sand and surrounded it with feathers, branches and plants.  Next to the image Vicuña wrote: “The ear is a spiral to hear a sound within An empty furrow to receive A standing stick to speak Piercing the earth and sky the sign begins To write from below, seeing the efface.”  This precarious work was erased overnight by the high tide.

Felipe Guamán Poma de Ayala, (Peru 1530-?), was a Quechua poet living in colonial Peru, he learned Spanish and worked for the Catholic Church.  He wrote and illustrated “The First New Chronicle and Good Government” a 1,200 page manuscript reminiscent of the ancient kamayup, the keeper of graphic information in the Inca tradition, while also alluding to illustrated Catholic catechisms used to convert Indians in the new colonies.
Vicuña’s selection of images shows a treasurer holding a Quipu with an abacus at his feet.  The quipu keeper was an important and respected position with the responsibility of storing the records of the kingdom.  Another depicts a Spanish priest forcing an Indian weaver to work without pay in a chapter where Guaman criticized the Spanish for their poor treatment of the Indians.  The third shows an Inca festival and an Indian singing the song of the red llama.

Jorge Eduardo Eielson (Peru 1924 - Milan 2006) Poet, novelist and artist whose poetic, literary and visual practice, he stated “was one, indivisible and indissoluble.”  In 1959, while living in Europe, he began working with textiles, twisting, stretching and knotting fabric, in an effort to reconnect with his Peruvian roots, he revived the idea of the Quipu, transforming the antique Inca writing system of knots on cords, into the semantics of contemporary language.

Concrete poetry, an experimental form of poetry from the 1950s and 1960s, can be a kind of picture made out of printed type.  It usually involves a punning kind of typography in which the visual pattern enacts or corresponds in some way to the sense of the word or phrase represented.  Concrete poems are apprehended instantaneously by the viewer as visual shapes, since they dispense with the linear sequence demanded by language.  Concrete poets defined the visual poem as a kind of verbal “constellation in space.”  The page for them was a space where creation and invention happen simultaneously for author and reader.  According to Haroldo de Campos the “poet defines the play area, the field of force, and the new reader joins in.”

Simón Rodriguez (Caracas 1769 - Peru 1853) was a teacher, philosopher and translator of Chateaubriand to Spanish.  He traveled throughout the Americas and Europe reaching Russia where he lived for some time.  By the end of the 1700’s he had worked at a printing press in Baltimore.  Simon Bolívar was his student, and later they reunited in the quest for South American independence.
In his writing he created a hybrid of didactic essay and visual poetry through a set of aphorisms, which he called “the art of painting ideas.”  He altered typography and fonts in midsentence to highlight the power of the concept, in this he was a forerunner of the European avant-garde typographical experiments of the end of the XIX Century.  The two pages reproduced here are from his book “Luces y Virtudes Sociales,” printed in Chile in 1834.

In April 1921, while Torres-García was living in New York, the American Futurist painter Joseph Stella, a founder of The Society of Independent Artists invited Torres-García to the Society’s yearly costume ball at the Waldorf Astoria, an event where artists competed to design the most creative outfit.
Torres-García’s costume; a map-like overview of the city in black, green and red that he painted on white cotton canvas overalls, is a conceptual masterpiece.  By aligning his anatomy to the City’s he was in fact personifying New York.  He painted NEW and YORK in large letters each on one leg, and on the chest he painted a heart with a red star inside, as if his heart and the city’s were beating together.